GIST: Juliana Garaizar thank you so much for talking with the GIST community about the topic of climate tech solutions as well as your organization Greentown Labs and all the fantastic things happening there. In fact, let’s just start with a big congratulations on Greentown Houston opening this past week on Earth Day 2021! It’s such a huge achievement and such an amazing space.

Some of the folks who spoke at the event such as Houston Mayor Sylvester Turner had very substantive things to say about Greentown Labs and the huge role that startups have in long term job creation. What’s also impressive is the number of startups that have gone through Greentown Labs Boston programs and the amount of funding they have received and the jobs created. So the first question, of course, is, can you just tell us the mission of Greentown Labs and tell us a bit more about the opening of Greentown Houston and what it means for cleantech solutions?

Juliana Garaizar: Sure, and thank you for having me here. Greentown Labs is a cleantech incubator working to tackle all the industries that are the biggest greenhouse emitting sectors. It’s not only about electricity but it's also about power and renewables, agtech, water, transportation, construction, and of course resilience.

We started 10 years ago as a grassroots initiative by four entrepreneurs from MIT labs who decided they would rent a warehouse in South Boston for their work. Pretty soon more entrepreneurs wanted to join them. As they outgrew that space, the founders needed to continue growing their companies instead of running the space. That's when Emily Reichert, our CEO, came onboard. She managed their growth and their expansion and moved them from South Boston to Somerville and now we have a campus of three buildings totaling 100,000 square feet. The result has generated more than $1.6 billion in economic development in Somerville and has encouraged many biotech companies to move there.

80% of our companies are hardware, with the other 20% being software companies that are attached to hardware components. We have a lot of robotics and IOT platforms that track our various footprints. That's one of the big reasons why Greentown Labs has two thirds of its surface reserved for prototyping space. That's the biggest difference between us and other incubators and the reason why we are called Greentown Labs. Most of our companies need this space to do the prototyping that otherwise would be done in a garage. These spaces are really exciting. In Boston we have a couple of Teslas that are being retrofitted, fuel cells, flying drones, hydroponic farms, an airplane wing on top of our building, and we hope that's going to be the same in Greentown Houston.

Our expansion to Houston began two years ago when our CEO Emily Richert had the opportunity to meet with quite a few of our partners about expanding to Houston. She also met with the vibrant Houston startup community. As a result, we decided to have one of our flagship networking happy hours called Energy Bars. With just a two day notice, 100 entrepreneurs showed up.

Houston Mayor Sylvester Turner wrote a letter to our board in Boston specifically requesting our expansion. He really thought we would become the catalyst for the energy transition in Houston. So, of course, when you receive a letter like that, you know you need to act on it. We started with our founding partners—the 11 corporations that were sponsoring us at the time—and now we have 28 founding and grand opening partners. It’s a great array of corporations in Houston. We also have 30 initial startups that have joined, virtually at first, and now quite a few of them have started to move into our new space that was just opened.

"Our programs bring both sides together specifically to streamline this funnel."

GIST: Wonderful! That’s a great introduction. And I love that the mayor wrote a letter asking Greentown to come down to Houston. I also find it insightful, because I see this in a lot of startups, that the initial founders had this great idea, they started to grow it, and then they brought someone else in to be the CEO. They recognized that they had the inspiration and the technology aspects, but this other person had the other skill set that was needed to really grow and expand the space. That's something that a lot of founders don't realize, especially when they come out of the lab. Sometimes you need to bring someone in who has those skills in order to get that explosion of growth.

What's your passion with cleantech and supporting climate technology innovators? Where do you fit into this?

JG: I came out of a career in early-stage investing and creating angel groups and early-stage funds all over the world, starting in Asia, then Europe, and now here in Houston. I’ve always been very excited about investing in cleantech. When I first did investing in cleantech in Europe, the market was not quite ready. That’s very different today. Solving climate change is a globally recognized issue. Many companies that are not even based in Houston still want to be part of our ecosystem.

Also, I've always been a DEI (diversity, equity, and inclusion) champion. I run a few funds and an angel network that are dedicated to bridging the gender and race gap in investing. I also bring that to Greentown Labs, not only in Houston but in Boston.

GIST: What kinds of trends or technology are you seeing in the community that's really got you excited?

We had an accelerator on circularity with Mitsubishi Chemical, and another Carbon to Value program, as well as one on energy efficient and healthy buildings, led by Saint-Gobain called the KAITEKI Challenge.

"The ROI on these types of innovations is finally high enough for businesses to be profitable. The regulations can make this transition happen a lot faster."

JG: Thank you for asking that. It really is one of the aspects that makes us stand out from other programs. Building that relationship with corporations has been a key focus. The kinds of companies we partner with are very different from the ones you might find out in Silicon Valley. Our startups are solving very big problems. They take a while to grow and they need a lot of support. Most of them are B2B companies so we like them to get to know their customers who are many times larger corporations.

When they start they don't have knowledge about the intricacies of big corporations and how to talk to them. We really facilitate that. Some of the larger corporations are looking to startups to outsource their innovation. Our programs bring both sides together specifically to streamline this funnel.

GIST: You’ve really got the best of both worlds with that dynamic. You also touched briefly on the role of policymakers. What aspects of policymaking does Greentown Labs consider when working in the cleantech sector? What role do policymakers have in helping to facilitate growth?

JG: Policymaking is essential. The regulations in these sectors are ever-changing. There’s the carbon tax and there are many incentives in the cleantech and climate tech areas. But it’s been tough. The ROI on these types of innovations is finally high enough for businesses to be profitable. The regulations can make this transition happen a lot faster and that's why, of course, we're very involved in policy making.

GIST: You obviously have a ton of support judging by the successes so far. For early-stage innovators who are bringing their innovation or idea out of the lab and into the market, and are considering developing a cleantech solution, what are the unique challenges they will face and what advice do you have for them?

JG: Innovation in cleantech is sometimes very different from other areas. Solving climate change is a global problem so, of course, the solutions need to be global, too. Typically the solutions we see are not just nice “add-on” innovations. In the case of cleantech we see solutions that are, in many cases, very disruptive. They change everything from the supply chain to the safety protocols to everything that is done around that. These solutions are not your typical dog walking app that needs almost no money to be created and can be bootstrapped until you inject more money for marketing. 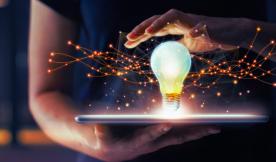